Two birds with one stone this week. For the first time, I read Alice’s Adventures in Wonderland. Although I knew the story and have seen Disneyfied film versions, I had never read the book which is on the #GreatReadPBS list. I also wanted to read it as part of a flashback my main character Eliza has within my novel.

Memory vs. flashback. A subtle nuance which we discussed at my writers’ retreat. A flashback is more involved than a memory. It can make a scene more dramatic. It can help a mind travel back in time to introduce new ideas, characters and relationships. It includes more sensory aspects than a memory, like the sense of touch or sound. I wanted to explore this idea as I set Eliza up for an important next step in her story. Here is the intro:

A mysterious world awaited on the other side. An exciting world, and possibly, as strange and fantastical as the world Alice had stepped into through the looking glass.

The other challenge with including a flashback, or a memory, is to avoid the obvious in its set-up. Avoid using phrases like, “She recalled”, or “Her mind went to”. I hope I have accomplished evoking a meaningful flashback in this passage by referring to Eliza’s age and inserting the sense of touch, “guiding her finger” and “a gentle tap … on her nose” and the sense of sound, “Aunt Flo’s steady voice” and “a proper English accent”.

For a different look at Alice’s Adventures, check out Melanie Benjamin’s Alice I Have Been: A Novel (Random House Reader’s Circle)

. Similar to treatments presented in the Girl in the Pearl Earring, Strapless, and The Painted Girls, it explores the story behind the story of a piece of art or literature. Benjamin considers the back story of Lewis Carroll and his relationship with a friend’s daughters as an inspiration of the Alice character. It’s an interesting read which can be construed a bit disturbing, but goes a long way in explaining the creative mind of Lewis Carroll.

Always a fun October book club when we strive for costumes related to the book we’ve read.  Here’s a few of us when we read, Alice I Have Been. Yep, figures I’m a Twiddle Dee or Twiddle Dum! 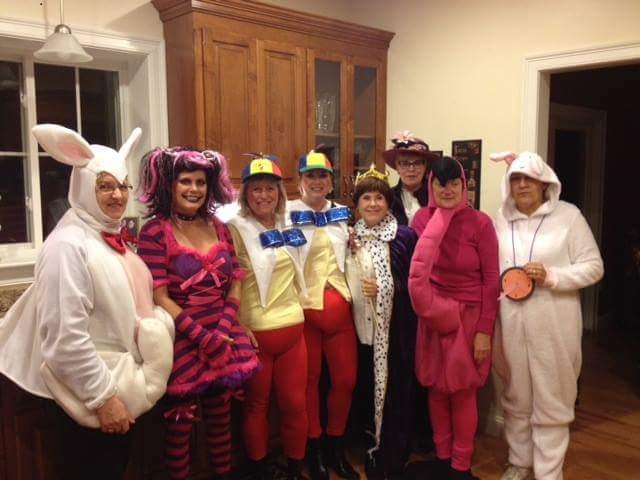 7 thoughts on “Adventures in Writing”