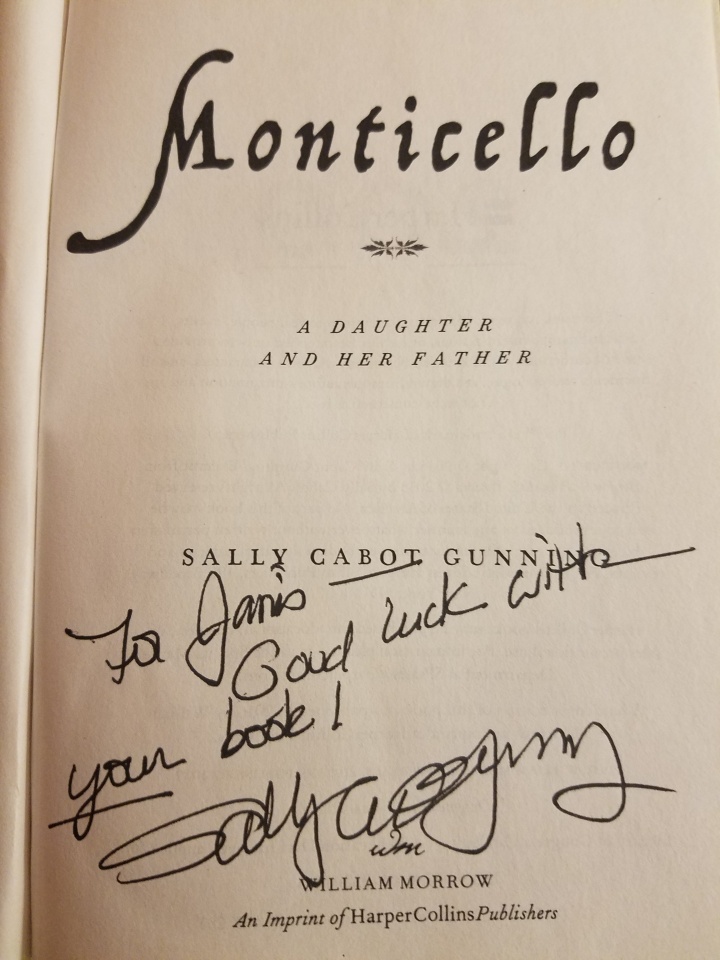 What a treat! Two weeks ago I attended two historical fiction writers’ appearances compliments of local libraries. A sold-out room at my town’s Sturgis Library hosted Sally Cabot Gunning. A smaller crowd gathered at the Marston Mills library for William Martin’s event. Both are prolific Massachusetts-based writers who spoke about their current novels. I assumed they both would have drawn crowds of equal numbers as they have each written well-known novels set on the Cape. I found Ms. Gunning’s presentation far more enjoyable, so I’m glad she had the larger event. And, as I looked around me I found my own potential audience of readers in attendance, women 50+.

Ms. Gunning lives down Route 6A from us on Cape Cod and Mr. Martin is in the Boston area, most likely Cambridge as he mentioned more than a few times he went to Harvard. He exuded a hint of Boston Brahman elitism and a level of confidence bordering on arrogance. Shouldn’t the number of books published and time spent on a best seller list be sufficient in speaking to one’s success? Did we need to know he received an esteemed Fellowship 40 years ago in film school? A misspelling of my name on the book inscription further mired my opinion of him, especially when I start off by spelling my name for anyone: J-A-N-I-S, not “ice”. He didn’t listen, he didn’t care and wrote “Janice”. I will still read his book, Bound for Glory, at some point as I do find the premise around the California gold rush era an interesting topic. For those following parts of my WIP (work in progress), you’ll know that my main character’s brother goes off to the later Yukon Gold Rush.

Both authors provided background on their methods of research and writing process. But, I found Ms. Gunning’s advice far more helpful for an aspiring historical fiction writer boiled down to this statement:

To know the facts, you need to consider three points.

I knew Ms. Gunning follows her own guidelines as she has artfully combined facts with heart based on the success of the novels which I have read and enjoyed, The Widow’s War* and Benjamin Franklin’s Bastard. Her latest novel, Monticello, A Daughter and Her Father, pegs another success. At the onset I had some hesitation that repetition awaited on the pages before me. I had previously read another book on the exact same topic, America’s First Daughter by Stephanie Dray and Laura Kamoie. Both novels examine the life of Martha “Patsy” Jefferson Randolph, the daughter of Thomas Jefferson. <Blog post: Libraries Lead>

Before the Monticello reading, I looked at the frontispieces of each book.  Both were published in 2016. Both were published by Harper Collins. How did this happen? I asked this question to Ms. Gunning during the Q&A period. She immediately replied she was not happy, but within Harper Collins, there are different divisions and apparently they don’t confer with each other. Both books were already too far down the road of publication to stop one of them. Note to self for my novel – check out if other novels have been written around my genre and topic.  And, pray no one else is writing about the same when I get closer to publication.

Rather then spend the time with a compare and contrast essay between the two books, I encourage you to read both and draw your own conclusions. Monticello is written in the third person narrative from Martha’s POV. America’s First Daughter is in the first person. Monticello picks up the story in 1789 when the Jeffersons return to Virginia from France. America’s First Daughter starts in 1781 closer to the time of Martha’s mother’s death.

One of the most compelling take-away from both events is the amount of labor each author devotes to writing. From research to writing to editing, to revising, to polishing, to reviewing with editors, to publishing, to promoting, it took each one at least two years to finish their current books.

When you think of it, are there many professions where you spend years to realize the fruits of your labor? The only one I can think of is an architect. And in a way, aren’t authors the same? Building structures of words to last for years to come. Structures which serve a purpose for its citizens. To me, books are those structures, serving a purpose of entertaining and educating its citizens.

Which means, it’s back to the building blocks for me. I’ve got a long way to go before the fruits of my labor will be recognized with a celebration Day.

Happy Labor Day to all!

*More information on The Widow’s War can be found in my Book Recommendations.

Thank you for reading this post. I invite you to follow my blog and join me on my journey toward writing my first historical fiction.  More information in the Novel Synopsis. You can sign up from this page with the pop-up, or send me a note through the CONTACT page and I can email you an invitation to follow.

3 thoughts on “The Writer, The Laborer”