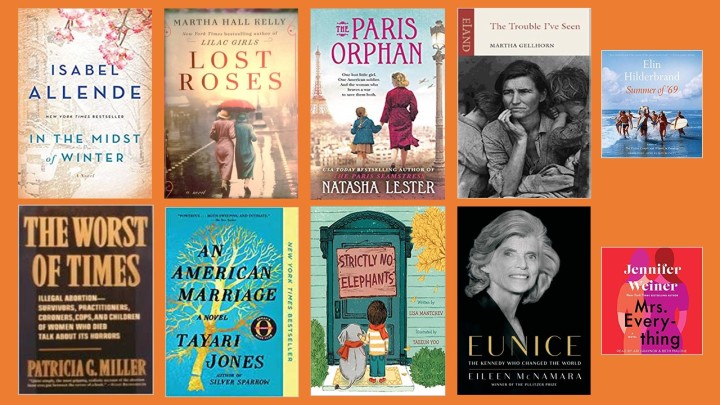 You would have thought with many days in July, August and some of September spent on the beach, I would have gotten through more than nine books these past three months. I’ll chalk up my meager stack to the fact the tenth book I read took a lot of my time. “Eliza’s Story” involved close reading and editing through 250-plus pages to prepare for sharing it in August with my book club.

I have an interesting mix of titles to share below with quick reviews. Books are linked to Amazon.

IN THE MIDST OF WINTER by Isabel Allende. Read for Book Club. Library Loan. An interesting exposition on the paths of South American immigrants and their reasons for fleeing their homelands. Published in 2017, I doubt Isabel Allende had any idea how relevant the issue would be today when she must have been writing on the topic several years ago. We had read several other Allende titles years ago, namely Daughter of Fortune which is set in her native Chile. In the Midst of Winter centers on the intersection of three main characters on a winter’s night in Brooklyn. Over the course of less than a week’s time, we learn each one’s backstory as immigrants from Guatemala, Chile and Brazil. A timely book and a great discussion as usual for our group. RATING ****

LOST ROSES by Martha Hall Kelly. Read for Pleasure (and some Research). Purchased at Kelly’s author event in Boston. As the prequel to Kelly’s Lilac Girl, Lost Roses follows the story of Caroline Farriday and her mother, Eliza, back to the times of WWI, the Russian Revolution and Eliza’s relationship with a Russian imperialist, a boarding school classmate and friend. Apparently Eliza, is the name of choice for books set in the late 1890’s / early 1900’s! I’m already excited for the next prequel, set during the Civil War. RATING ***** More information here: Lost Roses: Barbs and Beauty

THE PARIS ORPHAN by Natasha Lester. Read for Book Club. Received as an Advanced Reader Copy. Like many other women of my age, there has been a burn-out with a saturation of  novels set during WWII in Europe. And, what’s up with the covers of new releases all looking the same with showing the backs of female characters? Take a look at Lost Roses. The Paris Orphan, although partially set in France and England during WWII, is offset from the over-used WWII plot by developing a dual time-line with present day and the travels of an Australian art curator to France. The presentation of the experiences of women reporters (including Martha Gellhorn making an appearance as a secondary character) and photographers is well done and offers an interesting read. So, I forgive Lester for giving us another WWII story with an over-used cover treatment. The inside pages are worth the read. RATING ****

THE TROUBLES I’VE SEEN by Martha Gellhorn. Read for Research. Coincidence that I picked up this book before I read The Paris Orphan? Definitely! Now, do I need to worry that a secondary character in my book is modeled after Gellhorn is a rip-off of Lester? By the time I publish, The Paris Orphan won’t be as hot and people will forget. I am going on the record here and now that I wrote the scenes in “Eliza’s Story” before I read Paris Orphan. Troubles are the first-hand account written by Gellhorn during the height of the Depression when the Federal government sent reporters to the South to bring back authentic information of the need for Federal aid for poverty-stricken families.  RATING ***

SUMMER OF ’69 by Elin Hilderbrand. Read for Pleasure. Audible. Capitalizing on the 50th anniversary of one of the most eventful couple of months in American history, Hilderbrand crams as many of these events as possible into the lives of the Levin family. Each of the main characters, the four Levin children ranging from 13 to 28, are touched individually by the moon landing of Apollo 11 (Blair – oldest daughter), the raging of the Vietnam War (Tiger, son), Chappaquidick (Kirby – second daughter), and Woodstock (Jessie – youngest daughter). Set on Nantucket, I wanted to enjoy a typical Hilderbrand beach read but found the plot lines too forced and to the point of unbelievable in many spots. RATING **

THE WORST OF TIMES by Patricia Miller. Read for Research. The title and subtitle says it all. You’ll need to wait to read Eliza’s Story to find out how I used this book as research for scenes set in 1933. RATING ***

AN AMERICAN MARRIAGE by Tayari Jones. Read for Pleasure. A departure read for me to pick up a contemporary fiction, but as it came recommended by a good friend whose opinion I value, I dove in. A telling tale of relationships between spouses and friends and how those relationships can be tried and tested for success or failure. I don’t pay attention to cover bursts proclaiming it was an Oprah Book Club choice, but in this case, Oprah and I agree – a good read. RATING ****

STRICTLY NO ELEPHANTS by Lisa Mantchev. Read for Pleasure. A delightful children’s book I discovered with the help of my grand nieces on a shopping trip for new classroom books for a kindergarten teacher friend. A sweet story of friendship and acceptance, it has become my new go-to choice for a gift for any preschooler. RATING ***** School Days

EUNICE, THE KENNEDY WHO CHANGED THE WORLD by Eileen McNamara. Read for Pleasure (and some Research). An exhaustive research project to document and write a biography of Eunice Kennedy Shriver, sister to a President, Senator and Attorney General, wife of an Ambassador, but the most important title she claims is the founder of the Special Olympics and the champion of the intellectually challenged her entire life. I was fortunate to hear Eileen speak at an event for a group which supports intellectually challenged adults in the Boston area. A lengthy read, but worth it to understand where the real Kennedy power lay – hidden behind the gender of the third daughter, Eunice. RATING ****

MRS. EVERYTHING by Jennifer Weiner. Read for Pleasure. Audible. Good thing I had this one on Audbile – dear God, get on with it! An overdrawn-out story of sisters Jo and Bethie Kaufman from their middle school days in a Jewish neighborhood of Detroit into the years of late in life retirement and health battles. Yes, there were many relevant issues discussed and addressed, from drug use to lesbianism to death of a parent to divorce to love lost and love found to abortion to child raising. There were too many hot topics jammed together across 480 pages (must have been at least 10 roundtrip drives to my office this summer on Audible).  RATING **

Thank you for reading this post. I invite you to follow my blog and join me on my journey toward writing my first historical fiction.  More information in my Novel Synopsis. You can sign up from this page with the pop-up, or send me a note through the CONTACT page and I can email you an invitation to follow. I’m on social media, too!